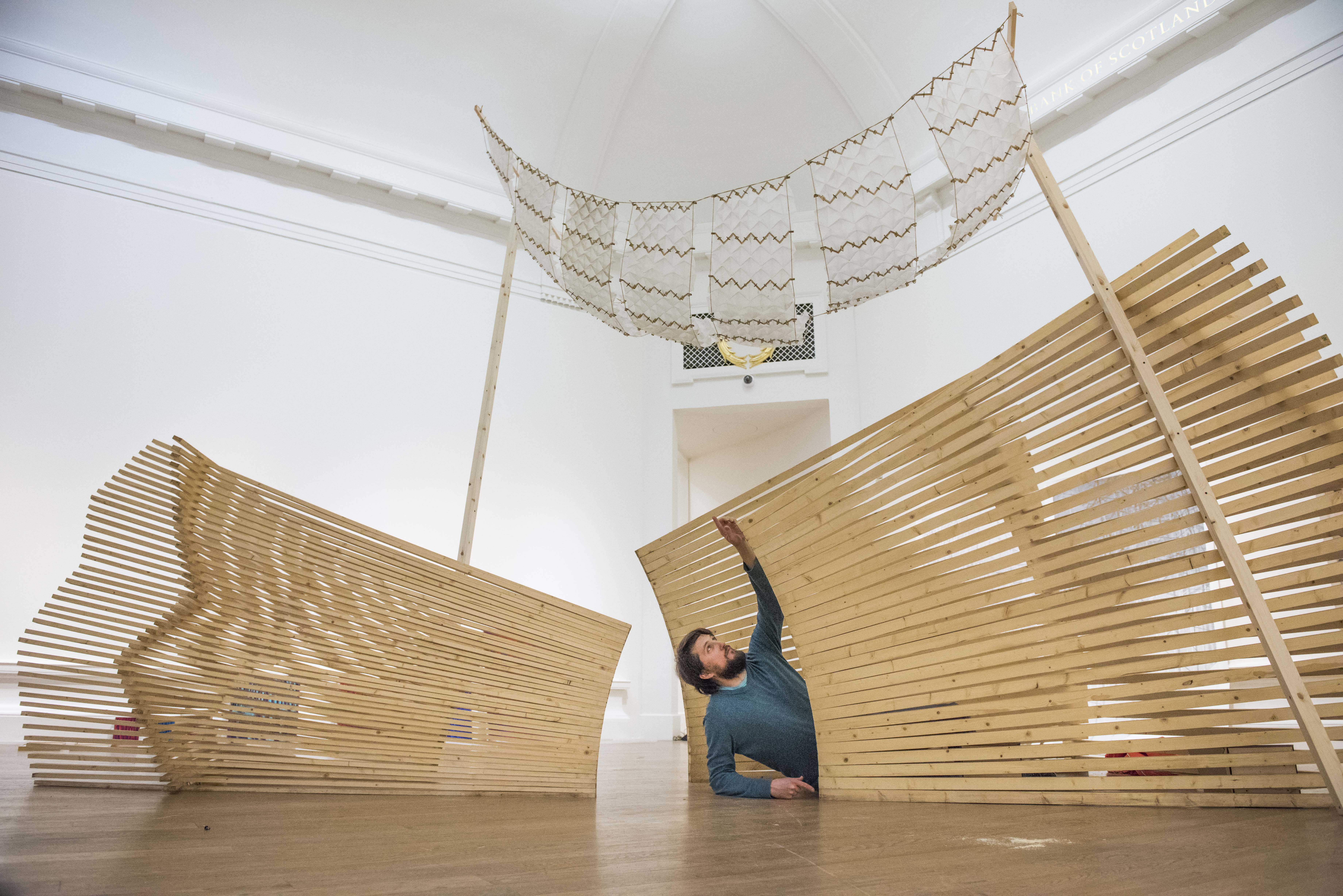 A Bacchanalian procession through the streets of Edinburgh; movements on the Crinan Canal turned into a sculpture; the UK premiere of Venice Biennale artist, Bettina Hutschek; all set alongside specially selected artworks from cutting-edge contemporary artists from Scotland and beyond: the Society of Scottish Artists Annual (SSA) Open Exhibition opens on 31st October at the Royal Scottish Academy in Edinburgh.

With a mission to promote and encourage experimentation and the adventurous spirit in contemporary art, the SSA is presenting its 119th Annual Exhibition with a line up of work by established artists based in Scotland and internationally and new artists. This includes invited graduates from Scotland’s principal art schools, installation, video, computer and performance art, which are set alongside a strong core of works in traditional media resulting in a challenging and invigorating show.

“This year’s exhibition continues in the tradition of presenting brave new art and I’m delighted to see such a strong line up of performance art, film and digital artwork set alongside traditional media. From internationally renowned artists like Bettina Hutschek to new graduates, the exhibition is truly thought provoking and stimulating.”

A section of the exhibition, Sit In/Take Away, also allows visitors to browse an array of affordable original artworks, which can be purchased, wrapped and taken away on the same day. The works encompass a variety of media including printmaking, painting, drawing, photography and mixed media.

The SSA Annual Exhibition is open daily from 31st October to 24th November 2016 and is free to enter.

The SSA has long aimed to represent adventurous work from Scotland and further afield with exhibitions including the work of the Post-Impressionists, Gauguin, Cezanne, Matisse and Van Gogh in 1913. In 1922 the Society presented work by Picasso, Daumier, Degas and Forain. In 1931, the Society showed, for the first time in the UK, twelve canvases by the then highly controversial Edvard Munch who went on to become a member of the Society.

The SSA today continues in the spirit of its founders, to show the controversial and the unexpected and to give hanging space to new artists of promise. It also regularly exhibits work from artists drawn from many areas overseas. In an art-world where the divide between new genres and traditional media has rarely been wider, the SSA plays a unique and vital role in bridging the gap.

The SSA is an artist-led membership organisation that is governed by an elected president and council. For more information on the SSA and exhibition visit www.s-s-a.org.

Bettina Hutschek (born 1977) is a visual artist and curator who lives and works in Malta. She studied Fine Arts, Art History and Philosophy in Florence, Augsburg, Berlin, Barcelona and Leipzig and spent one year as Visiting Scholar at TISCH, NYU. Today, she uses fragments of different realities to examine the possibilities of knowledge transfer – that is: to tell stories. She is founder and director of FRAGMENTA Malta, a project to organize pop-up exhibitions in the public space of the Maltese Islands.